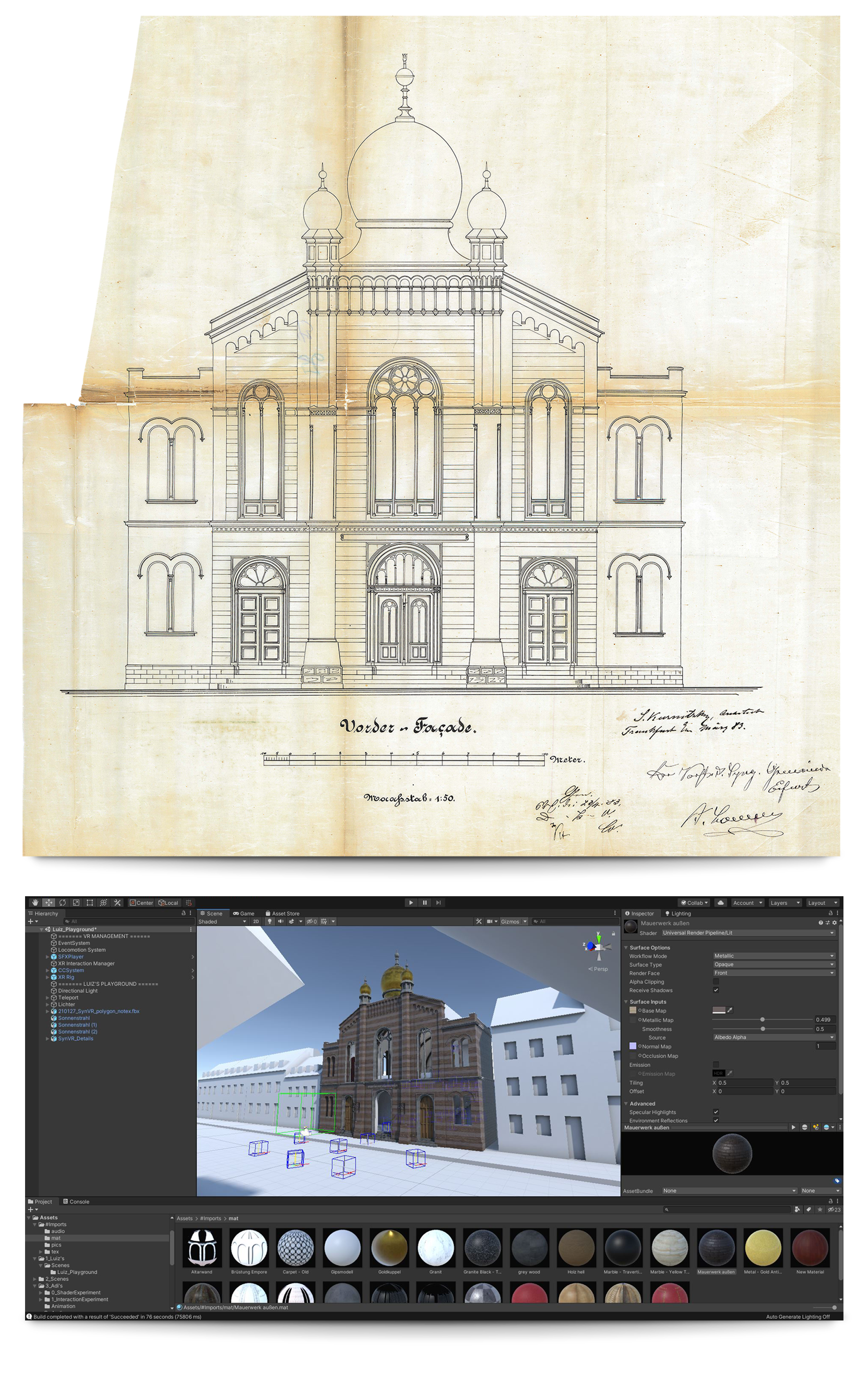 The Jewish community of Erfurt dedicated its splendid new synagogue on Kartäuserring (now Juri-Gagarin-Ring/Max-Cars-Platz) in 1884. With seating for 500, the building represented a milestone in the city’s German-Jewish history. Jews had finally attained political equality, and their growing community was an integral part of the late-nineteenth-century societal transformations that paved the way for Erfurt’s emergence as a modern metropolis.

Just decades earlier, the city had once again granted Jews permission to live within its walls following a 350-year prohibition. With the inscription over the main entrance to its temple, the Jewish community now took a self-confident stand against anti-Semitism and ostracism and in favor of tolerance and encounter: “For my house shall be named a house of prayer for all peoples.”

Buildings erected by Jewish families—for example the Römischer Kaiser department store (now Anger 1)—shape the Erfurt cityscape to this day. Jewish Erfurt’s most important early twentieth-century edifice, however,—the Great Synagogue—was looted and set on fire by the Nazis in 1938. The destruction of this house of G-d* was the prelude to the annihilation of Jewish life in the town. In 1952, the few who had survived the Shoah had a New Synagogue constructed at the same site. Today it is the center of a vibrant community.

* “G-d” omits the vowel in keeping with the Jewish custom of not writing out G-d’s name in full as a sign of reverence.

An Exceptional Encounter with History and the Present

For fifty-four years, the Great Synagogue was an important and vibrant place of religious practice and encounter for many people. Today, all that remains of its structural form are historical paintings, a few black-and-white photos and eyewitness accounts, and the building plans. Along with research findings and extensive exchange with the Jewish community of Thuringia, this scanty evidence formed the basis for the virtual reconstruction that now allows “visitors” to experience the Jewish house of G-d in its historical state. Apart from a meticulous reconstruction of the architecture, the main purpose of the project is to convey knowledge of Jewish life with the aid of multimedia.

The virtual reconstruction is an exceptional means of experiencing the Great Synagogue because the spatial and sensorial impressions it imparts are so lifelike. The potentials of innovative technology and the adventure of moving around in a virtual world are no contradiction to the aim of communicating and reflecting on historical knowledge. On the contrary, the virtual reconstruction makes the past a part of our present. And by doing so, it creates a critical historical awareness of the cultural wealth of Jewish life, the losses wrought by National Socialism, and the threats posed by the renewed rise of right-wing extremism and anti-Semitism today. This outstanding example of Erfurt town history provides a palpable experience of what diversity, democracy, and human rights mean for human beings and human society.

What does the virtual reconstruction hold in store for you?

Cutting-edge technology now makes it possible to revisit the Great Synagogue—as a virtual reconstruction. You put on a pair of VR goggles and enter virtual reality. Guided by your own curiosity and interests, you can explore the entire synagogue while walking, standing, or sitting. At a welcome station, you learn to operate the hand control, move about in virtual reality, and interact with objects. You also receive support from trained personnel. The virtual reconstruction is suitable for persons of any age and can also be used in a wheelchair. You decide how long you keep the goggles on. The tour, complete with all information offers, takes about 45 to 60 minutes.

You can look around outside the synagogue, in the vestibule and the main room on the ground floor, in front of the Torah shrine, in the stairway, on the women’s gallery, and in the attic. Optional additional information on the architecture and life in the synagogue is available at nine knowledge stations. In pictures and anecdotes, you encounter people who were active in the synagogue and contributed to shaping the congregation. You experience a Torah reading and music that was sung in the synagogue and played on the organ there. No prior knowledge is needed to understand the stories about the synagogue: the knowledge stations convey basic information on Judaism—the oldest world religion to worship a single, all-encompassing G-d—and provide insight into how Jews in Erfurt practiced their religion.

Sponsored by: The Free State of Thuringia – State Chancellery